Wilderness perceptions and practice in tourism 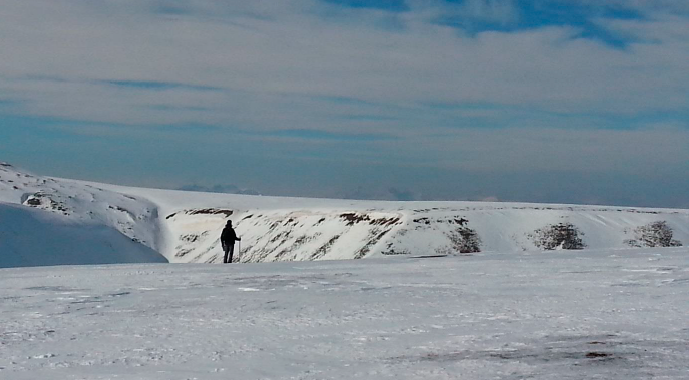 The common imaginary of wilderness as unspoiled, pristine, untouched, and untamed land plays an important role in Svalbard tourism—in both public presentations of Svalbard as well as in tour marketing. While such images are a social construct, as such, it is a significant factor in influencing the perception of the environment, and it is also a subject of negotiation and potential change. As the experience of both tourists and guides suggest, the process of transforming wilderness perception, and thus the change in perception of Svalbard’s environment, is ongoing.

For tourists, the perception of wilderness is partly transformed from untamed and pristine land into a nature-specific experience due to:
1) spreading knowledge about climate change and the Anthropocene that disturbs the image of untouched nature;
2) practicalities that do (not) allow one to experience the “real” (i.e. truly untouched and pristine) wilderness; and
3) accepted presence of humans and human traces (infrastructure, artifacts, tracks, etc.) that show the history and presence of human activities on Svalbard.

The last point is, however, problematic, as not all humans and human traces are accepted equally. The acceptance of those is, again, based on aesthetics and other value-based reasoning. The reasoning also changes according to knowledge about specific remains, perceptions which can be formed by guides.

Due to the socially and historically embedded perception of wilderness as untamed and pristine land, a perception which is further reinforced through PR strategies and marketing, wilderness becomes a perspective through which the environment of Svalbard is understood and through which tourists make sense of it. Consequently, the Svalbard environment is still partially perceived by many tourists (and some guides) as pure and untouched, regardless of human traces and presence.

The transformation in the perception of wilderness is ongoing not only for tourists but also for guides. For guides, the perception of Svalbard and wilderness is partly transformed into a situation in nature where one has to rely on oneself. As the data shows, wilderness perception is changing mostly due to a transition from “outsiders” to “insiders,” which includes:
1) knowledge about the nature and history of Svalbard, and
2) everyday routines and familiarity with the place.

This change in perception has consequences for the change of perception of guides’ work and working environment, where the notion of wilderness is disappearing and the focus shifts from sublime landscapes to work with people and nature and to a facilitation of the nature experience.

The guides possess and pass on a more open and complex understanding of the Svalbard environment to tourists which contributes to a deeper knowledge of the environment in its diverse forms, including natural phenomena, culture, history, and relationships between diverse phenomena in the environment. Recent scientific findings suggest that the environment is an outcome of both human and natural influences which both form each other. As such, the concept of wilderness as untouched and pristine land is a rather simplistic perception. While the transformation of such perceptions is ongoing, the multiple character of wilderness perceptions can be an opening for opportunities in tour production and tourism management in general.

From this point of view, it might be of importance to assess:
1) enhancing more open and complex understanding of the Svalbard environment in PR strategies, marketing, and general representations of Svalbard;
2) enhancing diversity of awareness towards the complexity of the environment of Svalbard, both cultural and natural, in the past, present, and future;
3) enhancing environmental education in tourism (including education of management, guides, and tourists)

This would also possibly lead to more realistic expectations of tourists and thus build a base for creating appropriate, holistic, and complex relationships with Svalbard’ s environment, reflecting its natural and cultural phenomena.