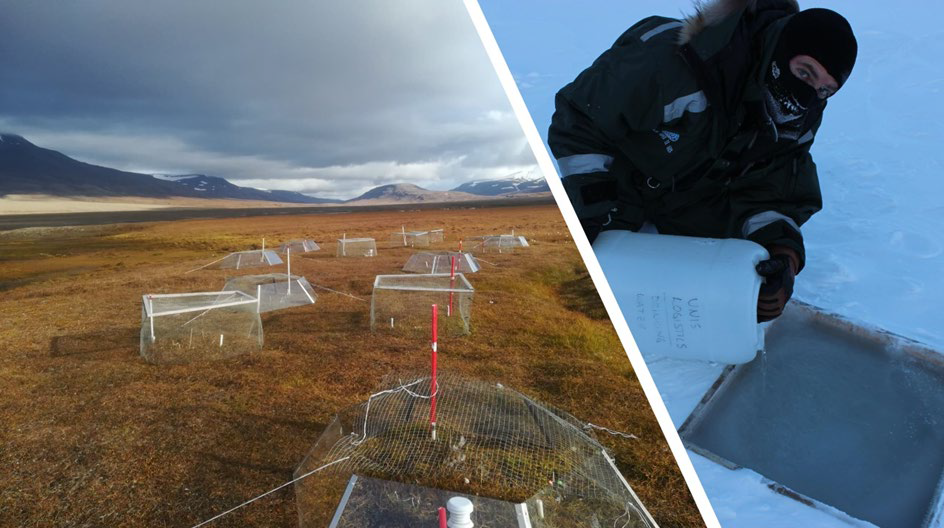 Simulated rain-on-snow and resultant icing in winter were further combined with summer warming (by Open Top Chambers) in a full-factorial generalized randomized block design. Experimental icing caused a delay in community-level vegetation productivity, but also increased peak (i.e. mid-summer) productivity in some years, compared with untreated (and warmed) plots. However, this occurred at the cost of reduced flower production in the icing plots. The delay in vegetation productivity caused by icing was associated with a delay of both the thawing and spring-summer temperature increase in the upper soil active layer (especially 10-20 cm depth), which can affect plant roots.

However, natural inter-annual variability in spring-summer weather, which caused shifts in spring onset of more than 3.5 weeks, exceeded most effects caused by icing or warming treatments. Our findings indicate that icing events mainly impact the soil-vegetation system by causing delays in seasonal development, followed by compensatory plant responses. However, they also suggest an overall resistance to such extreme events in this highly fluctuating environment. Thus, these results from mesic vegetation (with absence of evergreen shrubs) contrast with some recent observations of “Arctic browning”, which have been linked with changes in winter weather events and snow conditions.